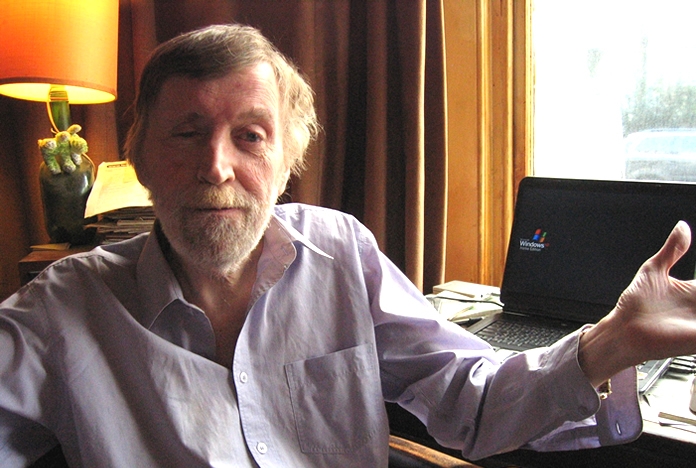 During the year 1944 in Lerwick, Shetland Islands, one Rognvald Andrew Mathewson was born.

The headline to this article refers to a nickname (reflecting the Shetlands’ strong Norwegian history) which was sometimes affectionately used but to the jazz world he is, of course, known as Ron Mathewson, a bass player of enormous talent.

Ron is now retired but during his long and distinguished musical career he collected or took hundreds of photographs which he has now been publishing on his social media outlet.

He has kindly given me permission to use some of them here and although the pictures are his, the reminiscences and opinions offered below are mine.

Ron’s musical journey kicked off with playing the Dashing White Sergeant and the Boston Two-Step in local events. He progressed to joining a well-known Scottish traditional band, followed by time with the Alex Welsh Band.

I must interrupt myself here to say how much I admired the Welsh band. The personnel was always top-class and the policy was to play dixie/mainstream jazz regardless of whatever passing fads and popular nonsense was going on at the time. Alex stuck to his guns although work must sometimes have been sparse.

Anyone interested in the history, inner workings and squabbles of the Welsh band should buy guitarist Jim Douglas’s recently-published volume, “Tunes, Tours and Travelitis: Eighteen years with the Alex Welsh Band”. The book chronicles Jim’s experiences with great wit and humour.

Although I have chatted to Ron on one or two occasions, the closest I ever felt towards him personally was when I joined the Scottish band mentioned above. The band was being re-formed and I was employed in the piano chair. I inherited the band uniform of who else but “Ron Mathewson”. That’s as close as you can get in a sense!

As was inevitable, Ron’s talent quickly pushed him beyond the confines of dixieland and he went on to play with some of the most illustrious names in world jazz, including, among many others Tubby Hayes, the Clarke/Boland big band, Joe Harriott, Phil Woods, Ronnie Scott’s quintet and the Charlie Watts orchestra.

I am afraid that Ron’s photos are largely undated but I don’t think that spoils the enjoyment of looking at them.

After a lifetime of playing and listening to jazz (mainly performed by considerably more able musicians than myself), the pictures bring back many happy and some plaintive memories. I have included only a small selection here. 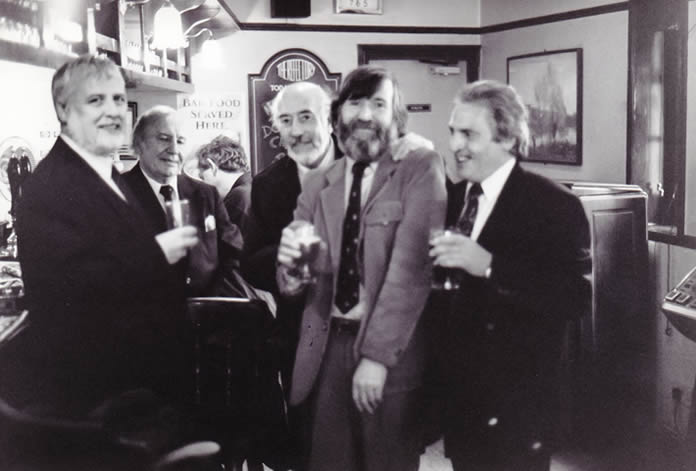 What a contribution the Bull’s Head in south-west London has made to British jazz. It  is certainly the old front bar where this picture was taken. The Bull featured jazz nearly every night of the year from 1959 and stuck to that policy through thick and thin.

I didn’t know the boss Dan Fleming personally but I was a frequent visitor to the Bull over many years and enjoyed chatting to Don on the door and Con the barman. Those two, although working a few yards away from each other in the jazz room at the back of the pub, never spoke to each other and followed a strict code of mutual enmity.

Although it was only a small room, over the decades I enjoyed listening to the cream of British talent and some surprisingly eminent US musicians including Pepper Adams, Art Farmer, Bill Watrous, Scott Hamilton and Charlie Rouse.

When the restaurant/pub was taken over a few years back, everyone feared the demise of the jazz policy. Yes the policy has been watered down but jazz is still included on certain nights and these days, one should be grateful for that. 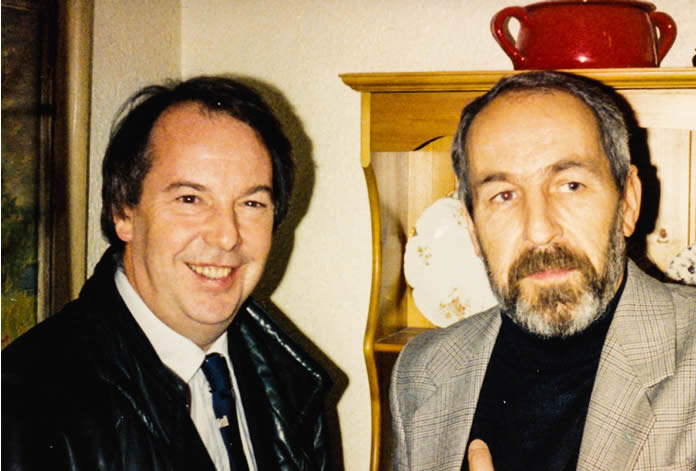 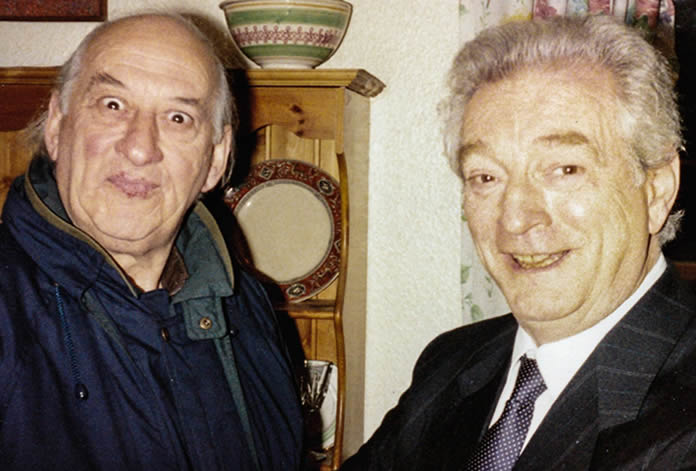 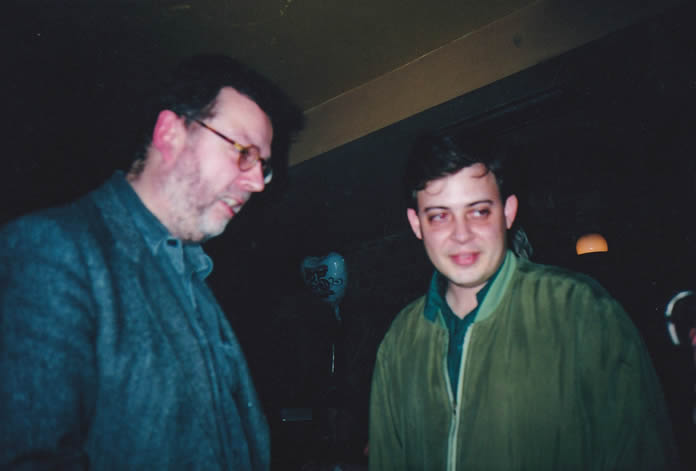 Of the six fine drummers pictured, I have a special interest in Trevor Tomkins.

I’ve only seen Trevor briefly in the past half-century but in the late ‘50s three South London teenagers - myself on piano, Geoff Brown (trumpet) and Trevor played in a quartet led by Mo Umansky.

Mo was the first remotely “famous” jazzman we had encountered in our short lives. He was a few years older than us and had played banjo with Sandy Brown during his “African Queen” and “Go Ghana” period. We were overawed at the prospect of playing with him.

Mo had moved on to double bass and the quartet scoured the pubs of south-east London desperate for somewhere to play. Money wasn’t even an issue, we just wanted a venue.

I can still remember Trevor arriving at gigs in a motorbike ridden by his Dad. Trevor and his drums were piled into a sidecar.

I have no idea whether Trevor has any recollection of those days but he went on to be a highly rated drummer on the modern scene. 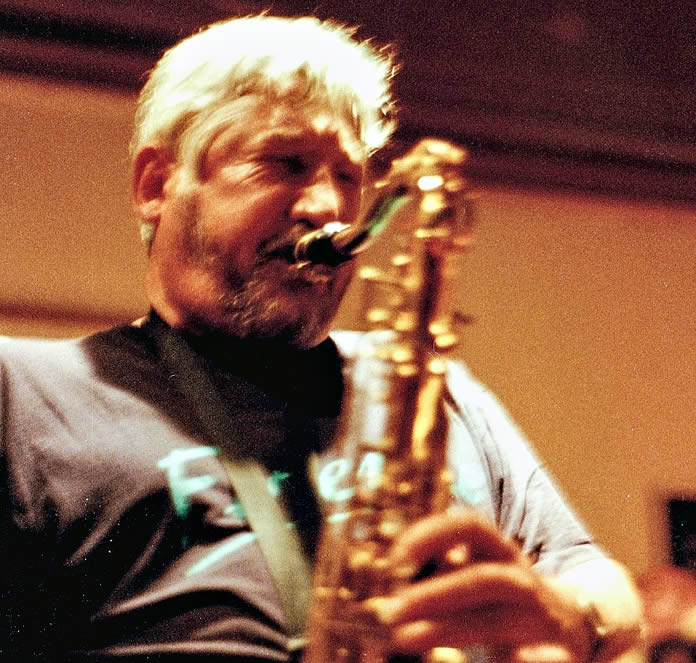 The three tenors (but not Pavarotti’s mob)…Dick Morrissey… 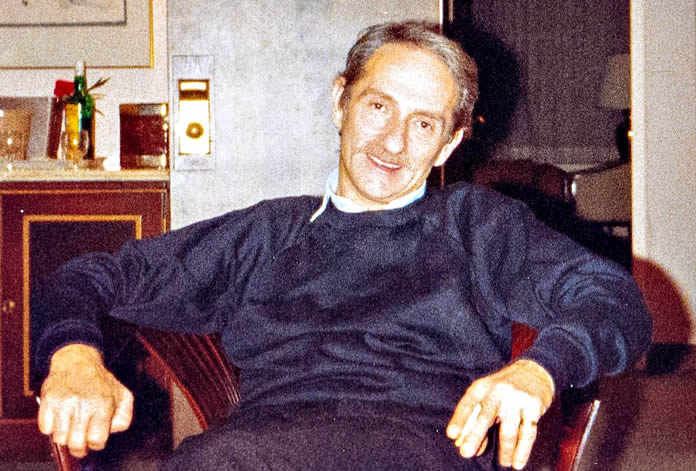 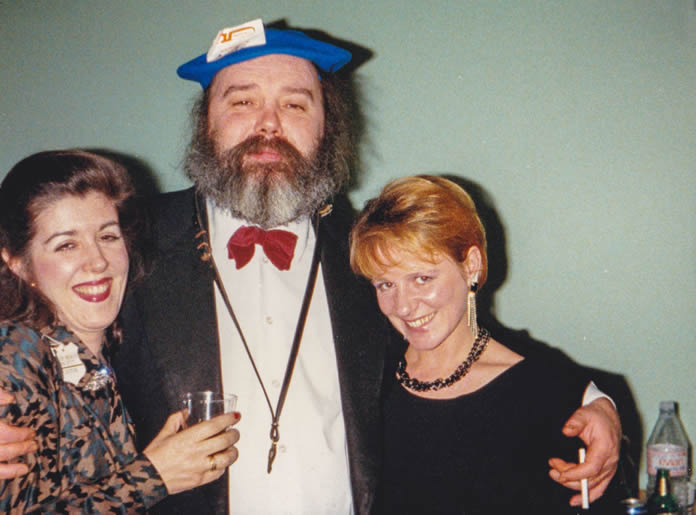 …and Don Weller in female company.

Dick Morrissey and Don Weller (along with Peter King) were contemporaries from the south London/Surrey area. Dick played clarinet in traditional settings in his early days while Don played classical clarinet, performing at Croydon Town Hall on one occasion.

Both have been a big presence on the British scene and Don has often turned up to play in pub venues in his Croydon home town.

Don, as well as being a superb sax stylist is also a brilliant composer and arranger while Dick crossed the borders into fusion with Jim Mullen for a while. I always felt Dick’s heart was always in straight-ahead bebop.

Tragically Dick’s career was blighted by serious illness and he was taken from us at an early age.

Bobby is a slightly older man and originates from Scotland.

Whether he likes it or not, he will always be remembered for his “Under Milk Wood” collaboration with Stan Tracey. The LP was massively acclaimed in the ‘60s although Stan claimed it didn’t sell well and he made no money out of it. It is still regarded as an iconic and timeless recording

Bobby has often performed with Don in two-tenor line-ups and his keening tone contrasted beautifully with Don’s robust and beefy attacking style. 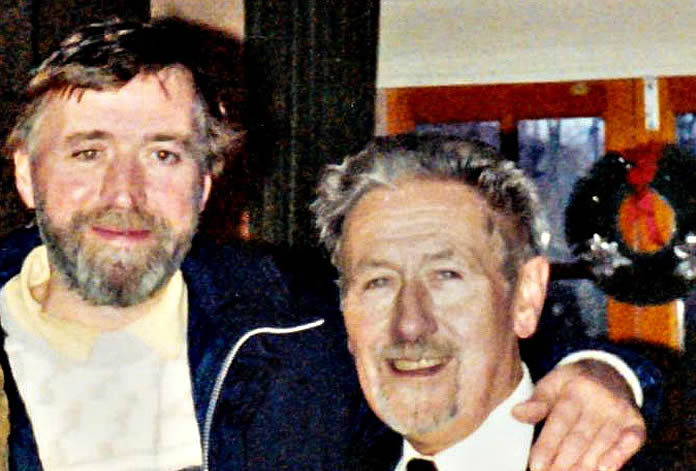 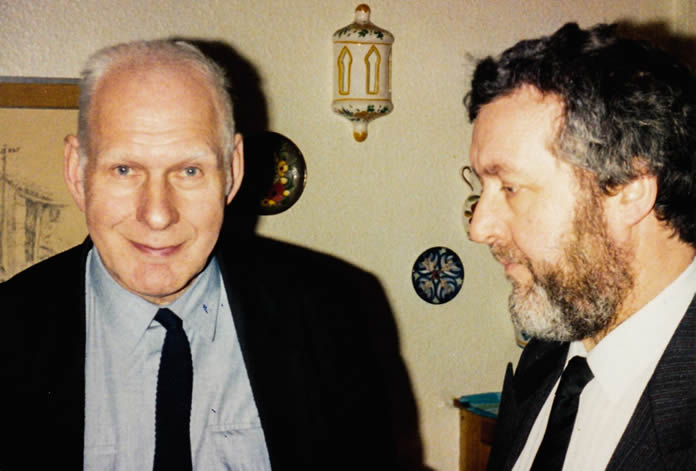 I remember going to hear Don at Park Lane Ballroom in Croydon in the ‘60s and not only loving his elegant playing but his sharp suit and cool modernist hair style too.

Bill Le Sage was also around in the very early days and played with, and wrote and arranged for, John Dankworth. Although he was primarily known as a vibes exponent. he was also a fine pianist.

When they were both still with us, Bill used to do piano duets with Tony Lee at the Bull’s Head.They produced some of the most enjoyable four-handed music I can ever remember.

Don and Bill were two musicians who never quite got the credit they deserved for their contributions to British jazz. 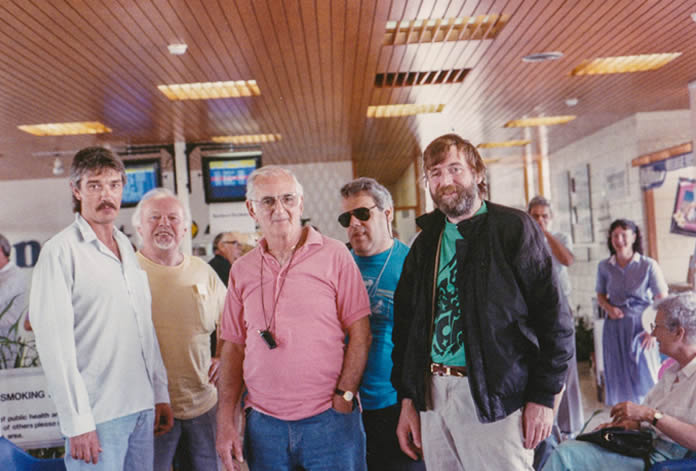 Must have been Boney M on the airport sound system judging by the reactions of Martin and Ronnie.

Ron Mathewson was a regular in Ronnie Scott’s house band which performed at the club as well a doing any other work that came along like an Australian tour when the above pictures were taken.

Ronnie’s club is still going strong and is a monument to the great tenor sax player that he was.

Although the club was taken over and has modified its jazz policy somewhat, it still features good jazz quite often. I was there myself recently and I can testify that it is still a great venue (see “The Full Monty a tasty treat” on another page).

Apparently the band referred to Ronnie by a nickname, “the Gunser”, but not to his face. 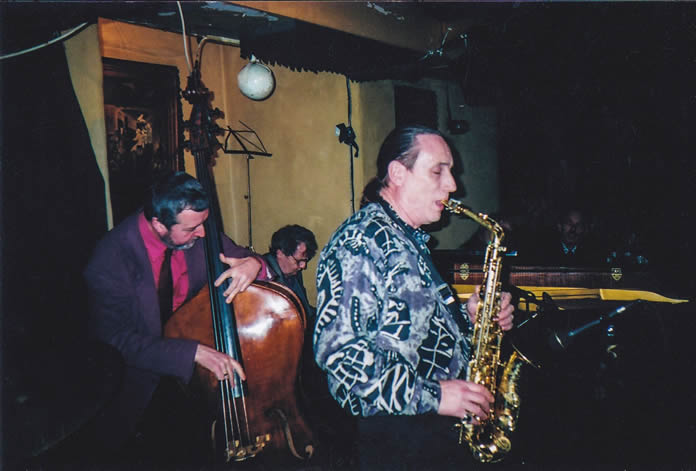 One could never really talk about British jazz and its top exponents without touching on the fabulous alto sax player Peter King.

His autobiography is reviewed on this site (see “Peter King - a life in jazz” on another page) and the book makes for fascinating although sometimes sad reading.

Peter is always an electrifying performer to see live and he has thrilled audiences everywhere with his playing ever since, as a teenager, he opened Ronnie Scott’s club in 1959.

Peter and I are near-neighbours in the Putney/Wandsworth area of South London and he has not been at all well of late as I can sadly testify after visiting him several times during recent months. Let us all hope he gets well soon and can carry on amazing us with his sublime talent. 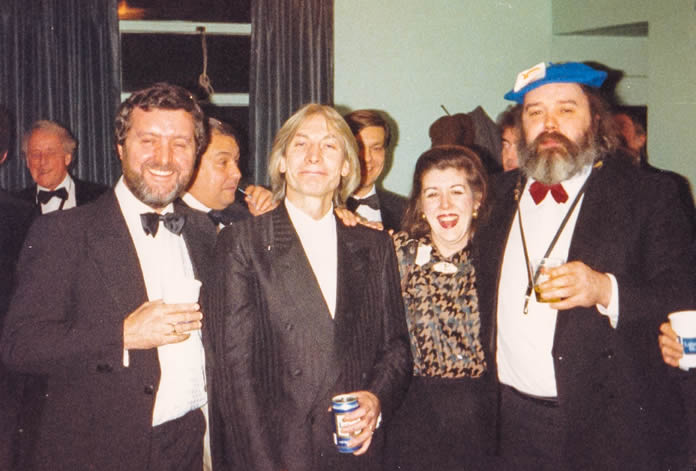 Charlie Watts with some of his big band in Australia.

In the 1980s, Rolling Stone Charlie Watts who had started off as a jazz drummer in West London, decided to form a big band and toured all over the world. It was no conventional 15-piece orchestra but a really big band, often using three drummers and umpteen of everything else.

One assumes that besides enjoying  playing jazz, Charlie wasn’t averse to some payback after his enormous success with the Stones.

Admittedly Charlie’s name on top would attract a new type of audience for jazz but even so the costs of organising and financing the venture must have been staggering for an operation like that.

Anyhow it brought a lot of good pay-days to a whole raft of jazz players.So good on you Charlie for that.

Let’s include a few more of Ron’s pictures below to conclude. 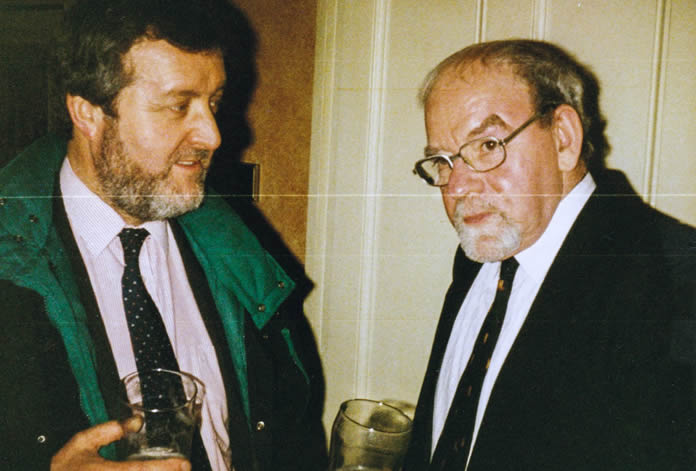