The Full Monty a tasty treat 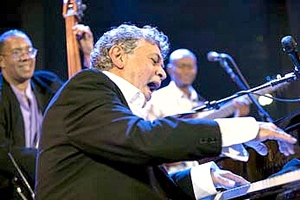 It has been a while since Jamie Evans visited Ronnie Scott's club in Soho. Earlier this year he made a personal pilgrimage to hear pianist Monty Alexander.

The last time I entered Ronnie Scott’s world-famous jazz club was in the late ‘80s. Guitarist Joe Pass was doing a solo season and played some terrific stuff. You have to be pretty good to sustain interest for a  one-hour set playing solo guitar.

In the ‘60s and ’70s I well remember turning up late to Ronnie’s; musicians who, in those halcyon days for jazz, had been gigging in the many pubs and small venues in the West End or had been doing theatre pit band work, were allowed in free in the later hours after showing a Musicians’ Union card or even carrying an instrument case (a problem for me as a piano player!).

Later on, when I had “retired” myself but yearned to listen to top-class players, I tended to patronise the Bull’s Head, Barnes, which was easier for me to get to, and get home from, cheaper, and more homely. There, I heard some surprisingly eminent US names

I have loved Jamaican-born pianist Monty Alexander for over 40 years ever since I was absolutely knocked out by the LP, We’ve Only Just Begun, featuring his best-ever rhythm section,  Eugene Wright (bass) and Bobby Durham (drums). That trio had the lot - technique in abundance, togetherness and transmitted a feeling of joy in every bar they played.

So when I heard that Monty was doing a spell at Ronnie’s, I decided to go for a double - hear him live for the first time and make a long overdue visit to Frith Street.

The club has, of course, changed considerably in recent years since it was taken over in 2006, expanded and adopted a broader musical policy although the shades of Ronnie and his partner, Pete King, still hover in the background. Even the ghost of Jim Godbolt, keen-eyed like a heron in the reeds, shimmered at the bar.

And it’s no good turning up on the night for a popular artist like Monty, paying your dosh and just wandering in. When I booked on-line, Monty’s sessions  were nearly sold-out so I had to be satisfied with a restricted view seat.

I had been informed that Monty would do two sets with a break, starting at 8:15 so I checked in at 7:45 and was surprised to find that the place was already full and my seat on a four-person bench was second along, meaning that a punter chomping at his dinner had to move into the aisle to let me in.

The view wasn’t really restricted but my reasonably sized body certainly was, jammed between the chomper and an elderly couple also eating but in a more decorous manner.

I also discovered that Monty was only doing one set starting at around nine o’clock but in the meantime there was a first-class backing band which included the outstanding pianist James Pearson who is always a pleasure to hear.

Apart from these very minor niggles everything about Ronnie’s was perfect - the view, the sound quality, the reasonable admission price and an excellent small carafe of Fleurie served by one of the pleasant and efficient waiting staff.

Soon, Monty’s bass man, Hassan Shakur and drummer, Jason Brown, were set up and from rear-stage, emerged Monty, now in his early ‘70s, elegant and jovial. The trio launched into Too Marvellous For Words and it was an absolute delight to hear, what is for this listener, one of the bedrocks of jazz, a swinging piano trio demonstrating  their class with effortless ease.

As the evening progressed, Monty proceeded to demonstrate that although he is able to swing his butt off, he can also do a mean ballad with a gorgeous rendition of When I Grow to Old to Dream.

Although he left his home town of Kingston, Jamaica, as a very young man, Monty has never lost his lilting accent and between numbers kept us amused with gags and anecdotes. He’s probably said it a million times but towards the end he announced: “Thank-you for being a wonderful audience, ladies and gentlemen, and it is fantastic to be here in the greatest jazz club in the world, Ronnie Scott’s,’” and then as a mischievous aside “…I said that at the Blue Note two weeks ago.” That really brought the house down.

He reminded us of his West Indian roots with a stunning Don’t Stop The Carnival which moved from calypso into hard swinging 4/4. I had heard him do that on video but live it was unbelievably good.

The trio continually interacted with grins, laughter and joshing, reminding the audience of what a wonderful experience playing, listening to and watching jazz of the highest calibre can be.

Monty and his companions embodied joy and exuberance, combined with effortless skill and they took the audience with them. When it comes to jazz piano genius, Art Tatum passed the baton to Oscar Peterson who passed it on to Monty Alexander. An unforgettable evening.