Early days in Leeds and London 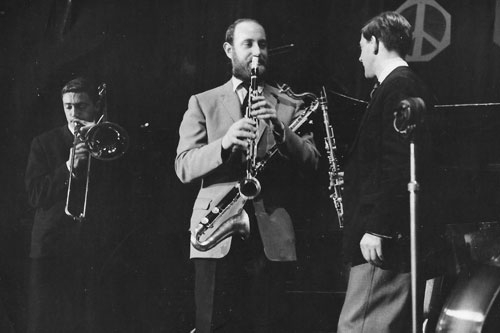 Writer and TV programme maker Tony Cash looks back to his boyhood, formative years and the life of one of his closest friends, Alan Cooper.

Alan Cooper was  a couple of years older than me and had a considerable influence when I was a teenager living in Leeds. We were both habitues of St Michael's Youth Club along with a few of my contemporaries at Leeds Modern School for Boys, including the writer Alan Bennett, and John Woodhead, who later carved out a fine reputation for himself as a jazz pianist in the Midlands.

The club was a bit of an intellectual hot house, where arts, culture and politics were hotly debated, with discussions frequently continuing late into the night at my home. I was fortunate in my parents Mick and Eileen, who positively encouraged friends like Coops to spend time at our house.

Even before I knew Alan, I'd taken up the clarinet in 1949, aged 16, having fallen in love with Johnny Dodds's playing, thanks to his emotionally affecting chorus on the King Oliver recording of Riverside Blues.

Discovering that Alan also played the instrument, and was far more proficient than I ever expected to be, was a splendid revelation.

At this stage, Coops was playing with the Yorkshire Jazz Band, so for a 2- or 3-year period there was a good chance I could hear the group most weeks. I have no recollection of Alan ever playing the clarinet at St Michael's, but he performed regularly on the piano there, almost exclusively in F. But what he conjured out of that key had us enthralled and amazed.

Around the same time, he was dabbling with the trombone. He would occasionally bring that instrument to sit in with an embryonic dance band group led by my brother Bernard on trumpet, John Woodhead on piano, myself on clarinet, Ted Wood on drums and an alto player who could read the notes better than any of us. We played every Saturday night at the Labour Party Rooms in Cardigan Road. Our repertoire was as limited as the number of couples venturing onto the floor. I have vivid memories of Coops belting out rumbustious, brassy choruses on "When You Wore a Tulip".

Around 1951, I was studying A Levels, and it was suggested to me that I have a go at Oxbridge exams. There was a shortage of sufficiently qualified specialist staff at the Modern School so I decided to spend time swotting at the reference library in the centre of the city very close to the art school where Alan was studying at the same time as two other talented jazz musicians, clarinettist Jack Cudworth and guitarist (vocalist and sometime trumpeter) Diz Disley.

One or other of these players would sneak me into the college canteen for lunch, followed by a blow at a nearby pub. When the publicans weren't co-operative, we'd find some secluded corner to play: I recall learning the "High Society" clarinet chorus from Jack in the ruins of a bomb-site.

I was fortunate enough to secure a place at St Edmund Hall, Oxford but had to do my national service first (1952-54). Learning Russian in the Navy gave me a second modern language to read beside French.

During that two-year spell, I saw little of Coops, who had signed on as a regular in the RAF to train as a pilot. Illness prevented him completing his contracted spell. 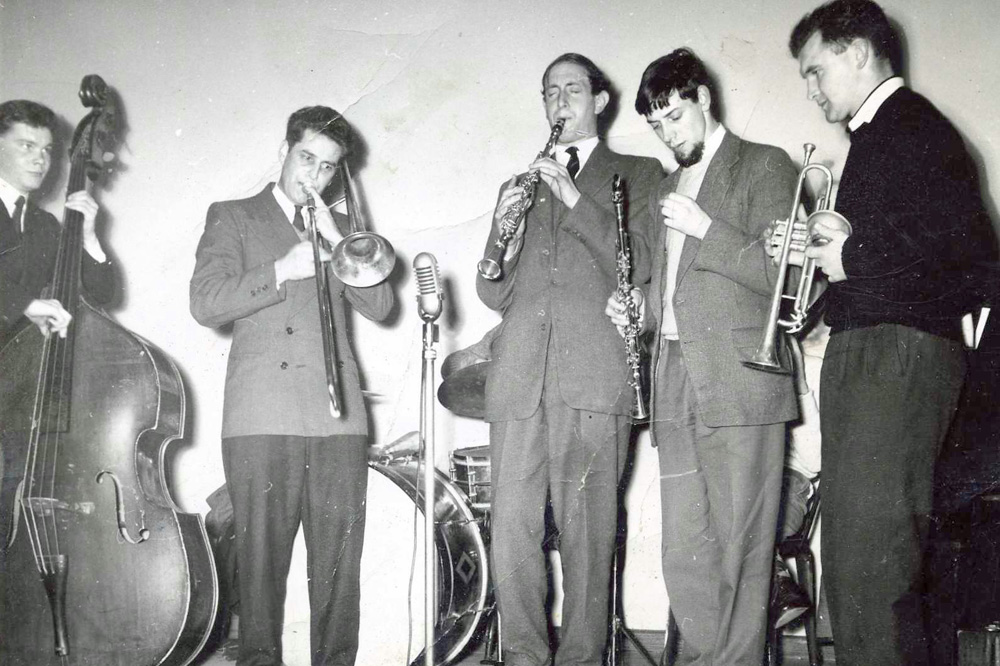 Above Picture:  The Oxford University Jazz Band with Coops and writer Tony Cash on clarinets (third and fourth from left respectively).

Demobbed like me in 1954, he went to the Royal College of Art in London to study sculpture, though he devoted more time to music than producing any art work. For the next four years I was the regular clarinet player with the Oxford University Jazz Band. Every term we would invite some well known performer to join us. Guests included, Diz Disley, Neva Raphaelo, trumpeter Dicky Hawdon, Beryl Bryden, Bruce Turner and, perhaps more frequently than anyone else, Coops.

The picture shows him soloing 3rd from left with Phil Wade on bass, American PhD student Ernie Hardy on trombone, myself, also sporting a metal clarinet, and Bob Robinson our leader on trumpet, who, incidentally had been at school with Disley.

Mike Pointon (see Farewell to unique talent and person on this website) has written most amusingly about the rivalry between Coops and Bruce Turner. When Mike told me about it only a few months ago, it explained a very strange incident, a kind of sequel I now realise, that had occurred back in the mid-fifties at one of our OUJB sessions. The guest was Bruce.

Half-way through, Coops turned up quite unexpectedly.  We asked him up on stage to join the augmented group. For reasons that were then quite baffling, Bruce began copying every phrase that Coops played, and did so mercilessly, indeed hounding him. Nothing was said; Coops made as if he hadn't noticed; Bruce just smiled enigmatically.

I suppose Bruce was an even more inventive improviser than Coops and probably had a better grasp of complex modern harmony - Coops, to the best of my knowledge, never ventured onto that terrain.

But Coops had another musical gift, which I'm not aware of Bruce ever displaying: he was capable of original and attractive arrangements. I believe some of the best orchestrations in the Temperance Seven repertoire were down to him.

I came down from Oxford in 1958 and set up home with my then wife and son Nicholas in a flat which was shared by Coops and his then wife, Peggy. I was teaching during the day and doing maybe two or three evening gigs a week. Coops did significantly more. Ocasionally, I depped for him.

For some 18 months or so, Coops led a rehearsal band. Its members at various times included Cephas Howard (trumpet and horn), Phillip Harrison (bass sax) - both had played with the Temps; Pete Shade on bass flute, Clorinda Smith (by whom Coops later had two sons, Boris and Rollo) on bass sarrusophone,. myself on clarinet and alto sax, and Coops on clarinet, soprano and bass clarinet.

By this time the Temps had scored at least one major hit, produced by the late and sadly missed George Martin. The aim of the rehearsals was to put together a small repertoire of numbers so we could audition for George. Coops chose the numbers and arranged them simply by playing the parts he wanted us to replicate; some of our suggestions were taken up too.

I recall a particularly striking version of Hoagy Carmichael's "Lazy Bones" which began with the melody played in unison in four separate but related keys. "Cheek to Cheek", "I met a Gal in Kalamazoo" and "Rhythm of a Jeep" were also given the Coops treatment. I still don't know whether he ever did make an approach to George Martin: the project was just allowed to drop.

I sometimes had the impression that Coops was reluctant to risk failure, though in this instance it could well be that he was just being kind, that he didn't really feel we were up to scratch but didn't want to hurt our feelings by telling us so.

Tony Cash's letter to Coops only a few weeks before he passed away.