Farewell to unique talent and person 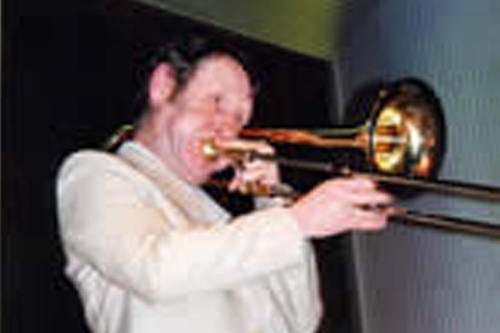 Mike Pointon, London-born writer/broadcaster and jazz trombonist looks back over the life of his deeply missed friend, Alan Cooper.

Alan Cooper was much more than a jazz clarinettist of world-class stature, he was a true gentleman born out of time with an innate capacity for friendship that transcended music .Perhaps he gained most public recognition via his eccentric Edwardian persona and a brief chart-topping period with the original Temperance Seven when they had an unexpected hit with You’re Driving Me Crazy in 1961 but there was much more to ‘Coops’, as his many friends affectionately called him, than that…
Gordon Alan Cooper was born in Leeds in 1931 and,while studying at Leeds College of Art,started playing in the Vernon Street Ramblers alongside fellow student Diz Disley ,who had entered the College on the same day in 1947. They both joined the Yorkshire Jazz Band in 1949 and by all accounts Leeds at that time with its street parades and use of jazz at local functions developed a communal ambience not unlike its inspiration,New Orleans .

The band’s trips to London brought them wider recognition,together with early,if primitive,recordings which included such future names as Dickie Hawdon and Ed O’Donnell . Unlike some of his contemporaries Cooper decided , although he loved playing,that his principal career lay in the art world and he graduated in sculpture at The Royal College of Art,eventually teaching at St. Martins and Chelsea Colleges .

He still took part in the burgeoning mid-50s London jazz scene and when the newly-formed Temperance Seven enlisted him in 1957,initially on bass clarinet ,Cooper’s tall,subsequently bearded,elegant figure and soft, cultured voice were ideal for their majestic on-stage image.(On a Middle East tour many years later,when playing in front of an after-dinner audience, he once drolly informed them that the bass clarinet was a seldom-heard instrument,mainly because its volume could hardly project above `soup level’).

I was playing regularly at the Royal College Of Art a year or so later in a band which included Bill Greenow and our banjoist was John Watson, to become known as `Gieves’ with the Temps, thanks to Cooper’s period sense of humour. Although several of their members sat in with us on occasion I don’t recall encountering Coops at the time but came to admire his gracefully stylish playing via their later records and through seeing them live .He gave up playing regularly with the Temps after his natural instinct against the more venal aspects of showbusiness became offended but his idiosyncratic style was showcased with such leading groups as Alex Welsh,Freddy Randall and Sandy Brown ,for whom he often depped as their creative styles had much in common. 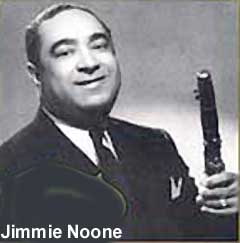 Cooper played a Clinton system clarinet and claimed to have had no particular influences but there were echoes of all the major Creole players in his work including Noone,Simeon and Darnell Howard.He also enjoyed New York jazz of the 20s,naming Jimmy Dorsey as a favourite. ‘Hot’ dance music by such obscure figures as 20s Chicago bandleader/saxist Paul Biese appealed to him and he particularly adored the charming songs of Cliff Edwards,`Ukelele Ike’.

He was an avid frequenter of junk shops and collected such obscure instruments as hot fountain pens and sarrusaphones which is perhaps why it seems Roland Kirk became a friend and would visit him to share this passion. Apparently Kenny Davern,not known for his modesty,would make a point of listening to Cooper when he visited London and was heard to praise him publicly.

I first had the pleasure of meeting and working with Coops in the late 70s when he played several gigs with Bill Brunskill’s band in South London and I was often invited to his palatial house in Wandsworth Common which,with its astounding collection of antiquities of all kinds, seemed almost like an annexe of the Victoria & Albert Museum.(When he moved to his final home in Hay-on-Wye it seemed as if a stage set had simply been struck and reassembled on another location!)Invariably the avuncular Coops would greet you(`Dear boy’) at his front door with a parrot that had already deposited something unmentionable on his Norfolk-jacketed shoulder and there would always be a long-term stew bubbling on the stove,perhaps a goat curry accompanied by an ancient killer-strength pickle of some sort!

We later worked alongside each other in Dick Laurie’s Elastic Band,occasionally with Coops’ old friend Jim Shepherd on bass sax. In 1979 Alan recruited a band for drummer Dave Mills,our mutual friend, who had been responsible for launching The New Temperance Seven with Coops and another near-genius Willie Hastie a few years previously but now lived in Bahrain.The idea was to assemble a group to entertain the ex-pats living in the Gulf.Alan kindly invited me to join and,indeed,we were to successfully tour the area for almost twenty years.
The band became known as The British All Stars and its nucleus originally included Jim Bray on bass and the remarkable but wayward pianist Bert Murray,about whom many unprintable stories abound.Guest trumpeters included Alan Elsdon,Andy Dickens,Ken Sims,Mike Peters,Ben Cohen and Ray Crane over the years and eventually Ray Smith replaced Bert on piano with sometimes Johnny Parker taking over and Rae Owens joining on bass.

Featured guests included Diz Disley,Keith Nichols and most notably Bruce Turner whose wonderfully quirky style on and off-stage perfectly complemented Coops.In his memoirs,Hot Air,Cool Music,Bruce wrote wistfully about their early encounters when he was with Freddy Randall , Coops was still playing with the Yorkshire Jazz Band and they appeared on the same bill together:`Whatever Alan Cooper did was greeted with rapturous acclaim.Then it would be the Randall band’s turn,and my clarinet solos had this curious effect of silencing the vociferous crowd.It was as if I had barged in on a private party and been coldly requested to leave.This was hard to take,considering the wild reception my rival,Alan Cooper,was always guaranteed to receive.I turned to Fred for advice.`I can’t think what this guy is doing that’s so special,’he replied, 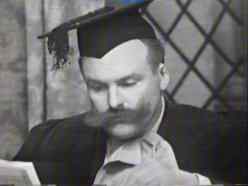 `I suppose you could try bobbing up and down the way he does.All I know is,he’s stealing all the applause.’ Bruce concluded: `neither of us ever found out what the Cooper sound was,or how it could be achieved.’
On a later tour Tony Pyke’s ethereal alto also proved an admirable foil for Cooper’s limpid clarinet . Another unforgettable occasion featured Jimmy Edwards as our special guest with his array of brass instruments. He and Coops got on famously with Jim,as a trained musician,being amazed by Alan’s eloquently poetic improvisations.He could also perform a wicked parody of Stranger On The Shore(`Strangler…’) at times but it was said that Acker had heard it and approved!

On all these trips,Coops was the first to venture into the local markets -or souks-clad in desert boots and sun hat and would emerge with all sorts of exotic souvenirs , camera slung around his neck, having taken numerous shots of any local landmarks that appealed to his ever-voracious aesthetic tastes .Once, we were playing in an Abu Dhabi hotel where an expat family were celebrating a wedding. They were so enthralled by Alan’s (Or `The Professor’ as he was often called) articulate oration in presenting our show that he was invited to conduct their reception and accepted with alacrity using such arcane words as ‘perforce’ to great effect as only he could!In fact,we discovered to our delight a local product in Bahrain called `Cooper’s Pif-Paf’- a spray designed to dispose of insects- so we used to whisper to Coops on occasions requiring verbosity: `Give them a burst of pif-paf’!

Picture: Prof Jimmy Edwards got on famously with Coops.

Alan could be easily moved,perhaps by music,a painting ,a beautiful view or a piece of literature that touched his heart ,but the time I saw him at his most emotional was when I had to break the sad news that his old Leeds friend,the fine trombonist Mac Duncan had taken his own life.

Another,lesser-known, facet of Cooper’s special talent was as a pianist and composer and he once demonstrated this by writing and performing a delicately whimsical theme tune, accompanied by just sousaphone,for a BBC radio series I compiled called Funny That Way celebrating the work of various famous comedians and presented by fellow Leeds expat Barry Cryer..

Tragically,in recent years Coops developed cancer and fought it courageously, looked after by his devoted wife Jenny , until his death on August 22, 2007, at home in Hay-On-Wye. But to all of those who knew him vivid memories of Alan Cooper’s warm personality will always be around to remind us how fortunate we were to share a treasured part of our lives with such a unique and, above all , kind person.

Some of Coops’ favourite musical interludes over the years were spent playing his e-flat clarinet in Mike Brown’s Excelsior Brass Band alongside such long-term friends as Cuff Billett,Jim Holmes and Ron Rumbol so it was appropriate that they should perform at his memorial service in Hay on September 4,followed by a musical celebration of his life by many other colleagues at Hay Castle organised by his devoted Jenny .
© 2021 Alan Cooper fondly remembered   |   DCP : Web Designers