Farewell to the Clydes 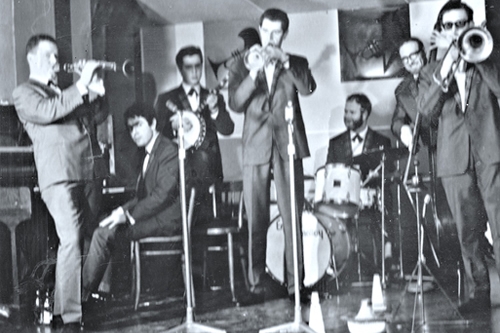 Jamie Evans harks back to 1963, an eventful year in his life

There is only a tenuous link in this article with all the other Alan Cooper memoirs and pictures on this site. In the early ‘60s I was fortunate enough to meet and become friends with the wild and eccentric Scottish pianist, Bert Murray.

In 1963, I was playing piano with the Clyde Valley Stompers and I met Bert a few times when he was on keyboards with the Alex Welsh band. I kept in touch with him over the years and in the mid-70s started getting occasional calls from Bert to deputise for him on Friday nights at the Rumboe, a jazz pub opposite the Old Bailey in the City of London.

“Halloo Rabbie, Rumboe calling,” became an oft-heard voice at the other end of the line. Bert decided that in those days I bore a strong resemblance to Robbie Burns and tried unsuccessfully to teach me an Ayrshire accent.

In those happy times London was saturated with pubs and venues featuring jazz of all sorts of styles and quality. The Rumboe specialised in clarinet/piano/drums trios every night of the week and front man on a Friday was Alan Cooper. Subsequently I was called up to do other nights too and had the pleasure of accompanying high-class clarinet players like Forrie Cairns, Will Hastie and Dick Charlesworth (in the UK every now and then from running his bar in Mojacar, Spain).

To begin with, I was a little intimidated. Coops was quite famous on the jazz scene and outside as well, for his work with the Temperance Seven who had made several hit records in the ‘60s. That wasn’t really my style of music but I needn’t have worried because Coops liked all types of stuff and we hit it off successfully.

Bert persisted with his barmy behaviour - one stunt was to do some of the session with the piano lid closed, playing intricate patterns on the woodwork. Like many before them, the management grew tired of Bert’s alcoholic escapades and fired him. I was offered the job and happily Coops, myself and drummer, Ray, lasted for three years from 1976-79 (see “The Rumboe Years” on this web-site}.

Sadly Bert died far to young but was featured amusingly in a recently published book which interested me a great deal, entitled “Don't Call Me Clyde! Jazz Journey Of A Sixties Stomper”. The author is Peter Kerr, a gentleman who I have never to my knowledge encountered but who led the Clydes until various matters came to a head early in 1963.

Peter has chronicled his life and times with Scotland’s famous jazz band and I looked forward to immersing myself in some British music history.

I was not disappointed. The author chose to spend a good chunk of his book with youthful reminiscences of a rural Scots childhood and the rites of passage which all of we aspiring jazz players of his generation went though.

There was the parental doubt, the struggles to learn how to play the blasted stuff, the first primitive bands, and so on. After serving his “apprenticeship” there came an offer of what could only have been a dream until then. “Issues” between Forrie Cairns and Ian Menzies within the Clyde Valley Stompers had led to a vacancy for a clarinet man and after breezing through “High Society” and more in a hastily organised session, Peter got the job.

So there it was; that young man’s idea of paradise, a full time job playing the music he loved. Naturally he would not have even suspected the eventual trials and heartache to come, many of which are graphically described in the book.

Interestingly, Bert Murray (mentioned above) throughout our long acquaintanceship never told me that it was his suggestion to record a jazzed-up version of Prokofiev’s “Peter and the Wolf” that had brought the Clydes their first and only top-selling single.

Early in 1963, I got a phone call. There had been “issues” with the Clydes and the band was being re-formed. I was doing a boring day job with semi-pro evening gigging and, like Peter Kerr before me, I was thrilled at the chance to play the music I loved for a living.

Would I care to do a session on piano with them and see how it went? It went well and would I like the job? The pay was £20 a week (a goodly wedge in those days), with extras for TV, radio and recordings and a full date book for the near future. The word “alacrity” barely covers the speed of my acceptance and we were all set to go.

Peter Kerr who was nominal leader of the Clydes had demanded a higher chunk of the income for the band, with some justification. This was rejected by the company which owned the name and his own dismissal was shortly followed by the exit of the others.

There are some matters concerning the band’s final year which I must point out. 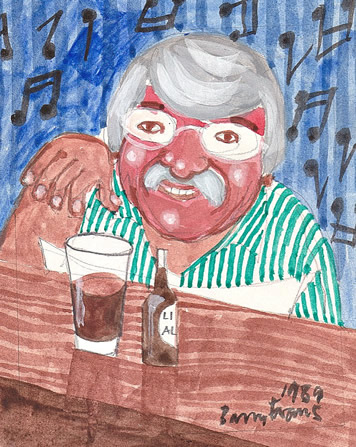 The “new” Clydes were not the full personnel of the Leathertown group but the former leader of that  band, Roy Pellett, was the new chief. The new recruits were all well-known musicians from different areas of the British jazz scene. I doubt anyone could doubt the high standards and excellent reputations of trumpeter Ian Hunter Randall (later Acker Bilk and Terry Lightfoot), guitar and banjo player Les Muscutt (Bruce Turner, Mike Cotton and a formidable figure in New Orleans music after he emigrated to the USA), and drummer Ernie O’Malley (later Long John Baldry and Rod Stewart in the Steam Packet).

Without going into chapter and verse about the rest of the personnel, none of the above were exactly stopgap journeymen dragooned in to make up the numbers and keep the golden goose laying. Even this piano player later went on to play with the Lennie Hastings Band, the Alan Cooper Trio, and the Al Fairweather Quartet, among many more over the decades. So I couldn’t have been that bad!

Another implication is that somehow the change in musicians contributed to the Clydes’ ultimate decline. By 1963, commercial trad was a dead duck. The emergence of the Beatles and other lesser talents spawned a host of what dear Bert Murray used to call “electric skiffle groups”.

It just wasn’t enough to play banjo-dominated trad standards every night, dress up in funny uniforms (in some cases) and expect success. We could see the writing on the wall writ large by the autumn of the year. On one memorable occasion in some northern hellhole the spotty-faced interval group of clanging, out-of-tune guitars were cheered to the rafters and we were welcomed back to total silence for the second half.

Ironically the last radio show we did included the Beatles who at that point were considered about equal to us in public appeal.  At least our by-now-expected demise was nothing compared with the reverse formula, the world-wide phenomenon of the Fab Four’s ascent. I don’t begrudge them any of it. They were enormously talented and a big influence in  20th Century music.

The jazz band casualty list was going to be long but in the meantime we were well received by crowds and promoters with one or two exceptions and those weren’t for lack of musical talent. Whatever name the band went by, we played high-quality music even if only bass player Matt Peyton spoke with a Scots accent; a good session was what the punters appeared to enjoy. The band terminated at the end of 1963 when interest and bookings dried up.

I knew nothing about the reality of the fate of the former band until I read Peter’s book but I hope his rancour is directed more at agent Lyn Dutton and the director of the franchise Ian Menzies, rather than fellow jazz musicians trying to earn a crust. Even so, it is a tough world out there. If you gamble and demand a pay rise and lose the battle it is hard luck. No good whingeing about it.  There’s always someone to replace you. That has happened to me too in musical and non-musical circumstances during my life.

I learned a few lessons during my stint with the Clydes. The most important one was that I was totally cured of ever wanting to be a travelling musician. Sitting in a bandwagon for hours, doing a three hour gig and travelling back to London wasn’t much fun in the end.

It was also extremely hard work. Modern groups would have hysterics at the idea of a seven-piece band travelling with one small amplifier and a single mic. But at least everyone but the piano player had their own instrument. Electric and transportable keyboards were yet to come so I was always at the mercy of the venue. Being confronted with some ancient barely-in-tune monstrosity wasn’t unusual. And you really had to hammer the keys to compete with all the other instruments.

It’s bound to be easier now, of course, with modern vehicles tor transport and at that time the only motorway was the M1 which didn’t even reach Birmingham. Consequently a gig in Newcastle for a London-based musician could involve up to 10 hours uncomfortable travel each way.

Like some other jazz musicians I started to use alcohol and amphetamines to give the illusion of energy and creativity. I was lucky to escape what could have developed into serious addiction problems.

I have since been told that I was in the running for the piano chair in a couple of well-known jazz bands who had later diversified into cabaret to make a living and spent their entire lives sitting in hotel rooms all over the world and doing comedy routines and re-hashes of hit records. Fortunately for me I was obviously not selected because there lay a life that would have done me no good whatsoever.

Later my interests and talents (such as they were) took me on a path where I worked in the media industry and did semi-pro gigs in the evenings; that was just about right for me.

Nevertheless this piano player enjoyed being a Clyde Valley Stomper and the highest standards were maintained for a famous and respected name to the very end. Thanks to Peter Kerr for a vividly recounted and interesting account of jazz experiences to add to an already rich archive.