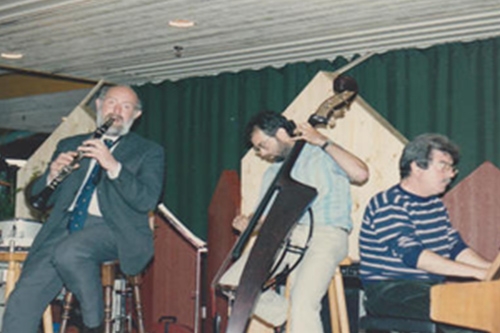 This story was originally published in the New Sunday Times Travel Book (1986) and is an account of a jazz tour of the Low Countries I made with former Temperance Seven clarinettist Alan Cooper in 1985. The tour was set up by another dear and departed friend, the late Dave Smith (1923-2006) of Eindhoven, Holland, who found the venues, accommodated us in hotels and his own home, and usually bought the beers as well...

"A Foggy Day in London Town, in B-Flat," says Coops. "One...two...one, two three, four," miming grotesquely. And off the four of us go, skittering through the chord changes. Two Brits and two Dutchmen, we have never even met before let alone rehearsed. We don't even speak each others' languages (unusual for Dutchmen to have no English). We are performing in the Trafalgar pub, Eindhoven, southern Holland, on an August Saturday night, by now halfway through a good, romping version - even though I say so myself - of Just One of Those Things.

QuartetThe Dutch audience is clapping, the proprietor is smiling. I titter at the piano as Coops, bass clarinet under his arm, makes his standard intermission announcement. "And now the gentlemen of the ensemble will take a short break and repair to the bar to mingle with members of the audience who will, no doubt, express their appreciation in the time-honoured tradition." And they do. Our first gig is a success.

Picture: The Alan Cooper Trio (there are in fact four of us) is a hit on the eve of our two-week Dutch tour.

The proprietor is an admirer of Thelonious Monk. He feeds me genever jong as I play Round Midnight for chorus after chorus until my hands can barely move through fatigue and gin.

The train to Maastricht is crowded with kids. They hammer out tattoos on the ashtrays, reassemble Coke cans and shout at each other. Coops and I try to doze in our corner seats but it is impossible. "Where are we going, dear boy?" says Coops. He's in his absent-minded academic persona today.

"Three days in Maastricht," I reply. "It's a medieval town stuck in a pimple of Holland between Belgium and Germany.

"Hmmmmmmm," he says, then straightens his military tie, dusts the jacket of his ancient and threadbare grey suit and puts his fisherman's hat on the rack above his collection of instruments - Bb clarinet, Eb clarinet and bass clarinet, to be precise. All this is routine for him. He flits about to the Gulf and Hong Kong all the time. But this is my first tour for 22 years, since 1963 when I was a young piano player with the Scottish jazz band, the Clyde Valley Stompers.

"And now," says Coops, grinning skeletally, "a tune which our pianist, Jamie Evans, and I used to play in an east London public house called The Rumboe. That is, on the odd occasion we remember being there. Coops MaastrichtLadies and gentlemen, Somewhere Over the Rumboe." Blank looks from the predominantly Dutch, Belgian and German audience. But they warmly applaud our version of Somewhere Over the Rainbow. A French girl buttonholes me and calls me "a genius of the piano". I snicker modestly at such a ludicrous assertion.

We have a new young drummer tonight. He's smoking a giant joint and drinking far too much. "Can't we play some avant-garde music," he says. Coops aquiesces, lizard eyes narrowed and beard twitching. "No piano, please," says the drummer, pointing me barwards. "Alan will please play the big bass clarinet and make elephant noises." Coops and I collapse helplessly and a tour joke is born, to be repeated and enjoyed night after night. 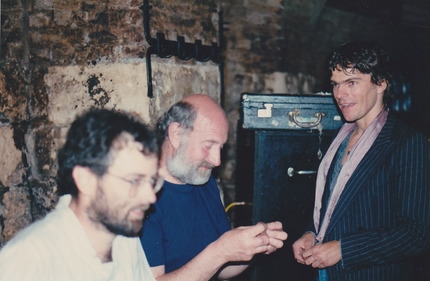 Picture: Coops consults with the bass player and drummer in Maastricht.

In Venlo, a south-east Holland border town, the rain pelts down on the asparagus fields. Western Europe is suffering its worst summer for decades. Dutch and German TV stations show scenes of caravan and camping sites sinking into the mud. It's an eye-opener for us who have been taught to believe that British weather is always worse than anyone else's.

Coops & JamieThe Sunday afternoon gig is in a pub/brewery. And at 3pm, a time when English pubs are closed and dead [ in 1985], we launch into Can't We Be Friends? But the audience is very talkative which irritates Coops. He makes his stock anti-noise announcement. "Ladies and gentlemen, the next tune, Groovin' High, will feature the bass clarinet. Not many people are familiar with this instrument. This is because there aren't many of them, few people play them and most people are talking too much most of the time to be able to hear them anyway."

It's a long way, by Low Country standards,from Liege in northern Belgium, to Amsterdam,
slap in theBamboo Bar middle of the Netherlands. As the train rattles along, the landscape, housing and life-styles change gradually but markedly. "I like the Belgians," says Coops, drinking his Pils beer and stuffing down ham and cheese, doggy-bagged from the hotel that morning. "They're just like us. A nation of stroppy piss-artists who'd rather go down the pub than mow their rotten lawns." The straitlaced Dutchness, un-netted windows to show off their ubiquitous house-plants and dour furniture, takes over the view from the carriage window.

I feel excited by the prospect of seeing Amsterdam again. We roll through the suburbs and as soon as we set foot outside the station, Coops decides he doesn't like it. "Junk food, noise, traffic and children. Appalling place, dear boy."
"But," I cajole, "there are lots of lovely paintings here - Rembrandts, Van Goghs - all the old and new Dutch masters." He's slightly mollified but grumpy. 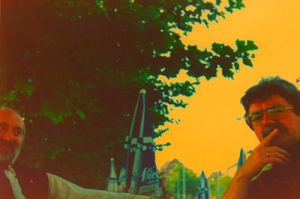 Our hotel is just off Leidsestraat, only a few minutes' stroll from the Bamboo Bar where we are booked for a couple of nights. We have both developed a craving for the delicious Dutch street snack, raw soused herring with chopped onions. But here in tourist-stricken Amsterdam we can't find any. It's all hamburgers, chips, mayonnaise, ketchup and imitation sate.

Right picture: Jamie and Coops in a sunset scene. 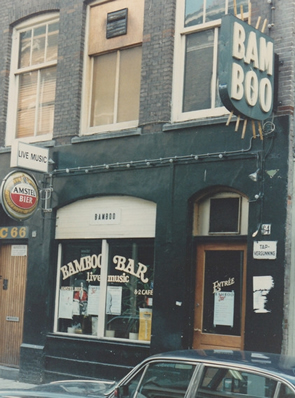 Right Picture: The Bamboo Bar used to be a great jazz venue but when I was last in Amsterdam a few years ago it had become a noisy pop music craphole.

The first person we bump into on German soil is Johnny Parker, veteran jazz pianist and long-time crony of Coops. They egg each other on with tales of the old days. "So Coltrane comes down to my place trying to buy my straight soprano sax," brags Coops. "So I told Louis to try this Swiss laxative," trumps Parker.
DusseldorfBy mid-afternoon, in a famous Dusseldorf beer hall, we are well into a jazzers' convention, drinking small glasses of dark alt beer served by genial blue-clad waiters who replace every empty glass with a full one unless prevented. A few yards away, the dignified boats and barges sail down the broad sweep of the Rhine with grace.The afternoon passes hilariously. Back in England they closed the pub in the afternoons in those days just as you start enjoying yourself.

The weather changes in Amsterdam. The sun beats down and the canals shimmer. We have two days off and Coops, still grumbling about "children and burgers" heads back south to our Eindhoven base. I decide to stay on and enjoy the city. It's good to be on my own for a while, just wandering where I please...I realise how responsible I have been feeling for Coops, always having to find things to keep him amused in the daytime.
I look at the Rembrandts in the Rijksmuseum and gaze adoringly at the wonderfully restored Nightwatch, now de-gloomed into its former grandeur. Outside the museum a mock-up of the painting has been set up on the pavement with holes cut in place of the main characters' heads for end-of-the-pier style Dave & Anniephotographs. Is that funny or sad?
Dead cats and other nasties now float in what I remember as clean canals. The girls of the red light district posing in their shop windows haven't changed. Nor have the sex shops apart from their wares becoming more explicit. As I settle my hotel bill, the resdent cat purrs at my feet. I stroke it and see that my hand is adorned by four tiny black fleas.

Sunday afternoon in Rotterdam. It could easily be Croydon or Hemel Hempstead, all shopping precincts, parking lots and modernity. Hardly surprising as the Germans flattened the place early in WW2. We eat in one of the thousands of Chinese/Indonesian restaurants, magnificently dragon-decorated, but my chicken and its sauce have only been introduced in the past two minutes.

The Hook of Holland, our boat and Blighty beckon. I'm still in partial shock after being a pretend-professional musician but Coops is already making phone calls, doing deals and setting up gigs and trips.

My desk awaits me in the morning. 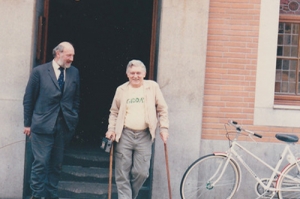 Bottom picture: My lifelong friend Dave Smith and his wife Annie outside their Eindhoven home. Dave organised our tour and died in 2006 at the age of 83, Never forgotten by your many friends, Dave... 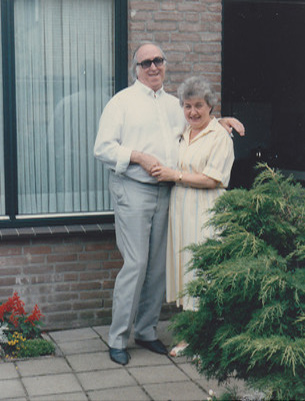