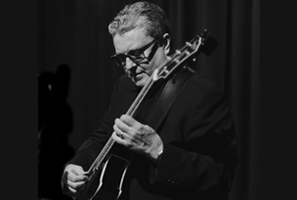 We take a personal look at one of Britain’s finest musicians. Martin Taylor kicked off his career as a jazz rhythm guitar player but now bestrides many genres with apparent ease.

Last year, after a few decades, I made a nostalgic return to Ronnie Scott’s to hear one of my great favourites, pianist Monty Alexander ( “The Full Monty a tasty treat” ).

Recently an excellent reason to make another fondly remembered but again, in my case, neglected venue cropped up.

The Pizza Express Jazz Club, Dean Street, in London’s Soho, has long served faithful followers with the best of British and many top US, players too.

I have many happy memories of the Pizza group of outlets. Starting 20 years ago it gave me the opportunity to hear my long-time piano hero Dave McKenna live and in London. I grabbed those opportunities several times and had the immense pleasure of listening to Dave and seeing at first-hand how he does the work of three pianists on his own.

If the above statement sounds absurd, any reader of this piece who has the unbelievable misfortune never to have heard Dave, now sadly departed, should do so soon.

The term “three-handed piano” was coined to describe his style which against all the odds, combines a treble improvisation with stabbed middle-range chords and a left-hand walking bass.

I owe the Pizza group a colossal debt for that if nothing else.

But I digress (as usual)! 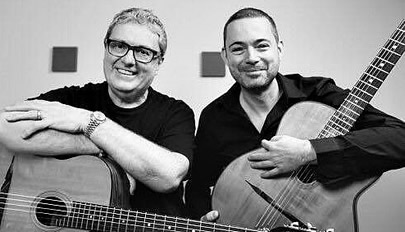 I noticed recently that in March 2017, an evening of gypsy jazz was on the Dean Street bill, featuring Martin Taylor and  Nolan.

Robin is a world-renowned exponent of Django style Manouche gypsy guitar while Martin, of course, can turn his hand to just about any style that takes his fancy.

After jazz in most of its forms, my favourite musical genre is Spanish flamenco. I had always thought that flamenco consisted of tarty girls in frilly dresses cavorting about clapping their castanets until I heard the likes of Paco Pena and Paco de Lucia in the ‘70s.

My wife and I visited Seville, Cordoba and Cadiz in 1982. Naturally we did the tourist things but at that time Seville’s old gypsy district of Triana hadn’t been demolished to make way for modernity and there were cellars where  for a pricey couple of glasses of tinto, you could hear pure and unadulterated flamenco.

That meant an old gypsy in a soiled white shirt singing his heart out, a nimble-fingered guitarist, possibly someone banging on a table for percussion and, if you were really lucky, a lady of indeterminate age casting haughty looks at you and stamping her feet in all sorts of counter-rhythms.

After that transformative experience, any type of gypsy flamenco was hugely appealing and definitely pointed to a visit to the Pizza

So how did I get to know and perform with Martin Taylor?

Any close friend of mine will probably have been relentlessly ear-bent about my days with that wonderful British drummer, Lennie Hastings (see “Oo-yah, oo-yah”).

Lennie had, for many years, anchored the legendary Alex Welsh band which continued to play dixie/mainstream music of impeccable taste through all the stylistic freakery of the trad boom to the near death of jazz altogether.

Bad health had ended Lennie’s time in the Welsh band so in the early ‘70s he launched his own band which, to my great good fortune, included me on piano.

Martin, then a skinny kid of about 15 or 16, took out his guitar and started to tune up.

Blimey, we’re using kids in this band, I thought and wondered what Lennie was thinking of, employing child labour.?

Naturally, after a few run-throughs of tunes for the prospective repertoire, the wind was well and truly taken out of my sails as Martin demonstrated a maturity and great technique which belied his young age.

During the following year or so of the band’s existence I got on very well with Martin. He was always respectful and engaging and although there was little he could learn from me, he didn’t ever show it.

Chordal instruments can sometimes clash in interpretation but I can’t remember any problems between us.

The Lennie Hastings Oo-Yah Band was well recieved and as well as attracting a first-class line-up, we were able to pull in interest and decent crowds at all the venues we appeared in - ranging from the 100 Club to a holiday camp somewhere on the south coast which Lennie aptly nicknamed “Colditz” where we were asked to accompany vaudeville-type acts  like jugglers and acrobatic dwarves.

I seem to remember playing on a Saturday night variety bill in the Kent Medway area. We were expected to give musical backing to Michael Bentine doing comic monologues.

As the old cliche aptly relates, all good things come to end and Lennie found running a band all too much for him.

Above Picture: Hot Club sounds from Martin and Stephane Grappelli.

As the years rolled by I always kept an eye on Martin’s career and watched him improve and gain an international reputation, especially during and after his long spell touring the concert halls of the world with Stephane Grappelli where he assumed the exacting role of his beloved Django.

During his career he has played and collaborated with top guitarists from a range of genres although I have always felt straight-ahead jazz was his favourite. However the old adage - “How do you make a million out of playing jazz? Start with two.” is a lesson he learned quickly.

We always kept in touch and Martin was never too busy to contact me with any news.

So, after 45-odd years it was an enormous pleasure to meet him again in person at the Pizza Express on the evening mentioned above.

The skinny kid was now a recent bus-pass holder but he was just as amiable and unpretentious and his guitar duets with Robin Nolan were quite sublime.

Martin does have a steely side to him which anyone who has been a pro on the road as long as he has would need.

There is a famous internet file of a telephone conversation between himself and the US bassist Eddie Gomez which he was probably unaware was being recorded.

Mr Gomez took a few unforgiveable liberties and was well and truly put in his place with a quite understandable rant, laced with expletives, from Mr T. It is extremely funny.

Anyhow this old friend hopse he carries on in his predominantly genial mode as long as he is able, bringing pleasure to his many listeners.

Below: Martin duets with himself on this lovely Ellington number.