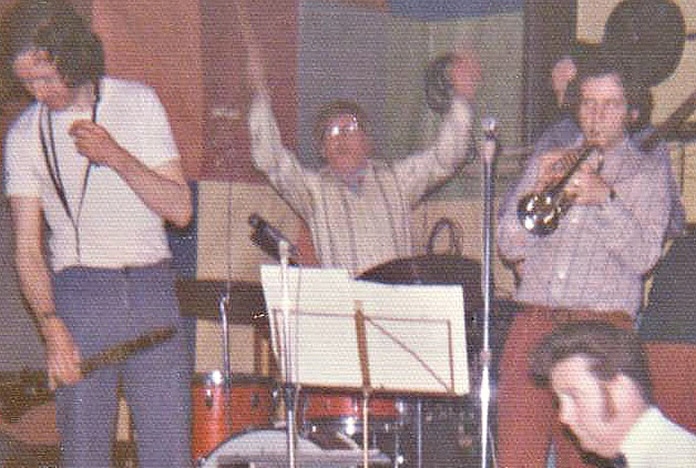 One morning early in 1972, I got a surprise phone call.

“Hello, Lennie Hastings here. I’m forming a new band. Would you be interested in playing piano for me?”

Well, I was certainly more than interested although it was with some trepidation. I had just started a new and demanding job and we were about to move into our first house so some challenging times lay ahead.

Nevertheless, you don’t get the opportunity to play with an almost legendary drummer every day. One of my good friends, the trumpeter Nick Stevenson had suggested me to Lennie and although the personnel did change the nucleus of the band - Nick, Ron Brown (trombone) and Malcolm Everson (reeds) - was well known to me.

To anyone wondering what the title of this article is all about, it refers to one of Lennie’s set-piece jokes where he would end a number by playing a drum break and waving his arms, shouting “oo-yah, oo-yah.” It may not sound funny written down but, like many of his little routines and jokes, it usually brought a lot of laughs.

Lennie was best known and undoubtedly still is, for his work with the Alex Welsh band which ploughed a lonely furrow of good taste over the decades, playing dixieland/mainstream music of the highest calibre.

Even in the mad excesses of the “trad boom” in the late ‘50s and early ‘60s, the Welsh band stuck to its guns when all around, others were dressing up in ridiculous outfits and playing a limited range of hackneyed rubbish.

My younger self had been a part (see Farewell to the Clydes ) of the crazy circus a few years earlier as it quickly disappeared with the advent of the Beatles and a total revolution in musical taste in the early ‘60s.

Lennie’s health had never been good and after a spell in hospital with cardiac problems he had been replaced in the Welsh band and decided to have a bash with his own outfit.

Bass player Buck Taylor was an old friend of Lennie’s and his son Martin got his first jazz experience with us.

Although Martin was good-natured and talented kid we could never have foreseen he would go on to become Martin Taylor, the world-famous guitar virtuoso. Even after all this time Martin and I stay in touch and he fondly looks back on his “apprenticeship” days with Lennie.

Our leader’s concession to commercialism was to buy seven tasteless shirts in a sale, none of which fitted anyone properly. That was the band uniform.

We played a mixture of dixie standards and more mainstream stuff arranged by Nick Stevenson.

Because Lennie was well-liked in the business we didn’t lack for work although, being semi-professional, it was often difficult to combine day jobs and evening gigs a fair distance from London.

Also, because of Lennie’s name and reputation we were able to attract guest appearances from musicians like George Chisholm, Beryl Bryden, Betty Smith and more. 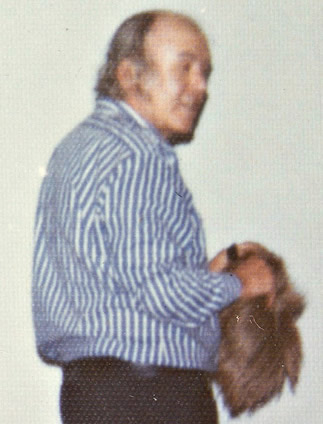 Lennie had a repertoire of comedy acts and probably his most well-known routine was to roll up his trouser leg, put a coal scuttle on his head and an old penny “monacle” in one eye and sing Auf Weidersehen in cod German.

There was only any marginal pretence that it was his real hair and quite often the wig would end up being thrown in the air and being shot, Lennie aiming with a drumstick and whacking his snare with the other.

Apart from the usual round of jazz clubs in pub back rooms which were commonplace in those days, we played in some unlikely venues.

There was a holiday camp somewhere on the south coast which Lennie aptly nicknamed “Colditz” where we were asked to accompany vaudeville-type acts  like jugglers and acrobatic dwarves.

I seem to remember playing on a Saturday night variety bill in the Kent Medway area. We were expected to give musical backing to Michael Bentine doing comic monologues.

On at least two occasions we turned up to phantom gigs where Lennie had got the dates wrong.

He wasn’t the greatest organiser.

Lennie quite liked a drink and would make up his own ration of gin and tonic in a large lemonade bottle, thus avoiding bar prices and having some stimulation close at hand behind his bass drum.

Some times after a little too much stimulation I would help him after the session and I became quite expert at the intricacies of dissembling and packing a drum kit.

On the whole the band was well received and got good reviews although we were regarded with some suspicion in the more traditional strongholds.

It lasted to the end of the year as Lennie found it all too difficult to cope with and we all went our different ways.

From my own viewpoint, it somewhat spoiled me. Playing with a drummer of such a high calibre made jazz piano so easy. I almost floated along on his swinging pulse and every session we ever did was sheer delight. That feeling was rarely repeated in the rest of my playing days.

Lennie was taken from us in 1978 at the shockingly early age of 53. He is still remembered with respect and affection by old friends and co-musicians.

I personally don’t believe in any afterlife but if I am wrong, there must have been an awful lot of “oo-yahs” going on somewhere in the past four decades.